A keen eye, a sensuous and exact imagination, and a buoyant spirit. -Ursula K. Le Guin

The work of award-winning essayist and fiction-writer Scott Russell Sanders has been compared to that of Emerson and Thoreau, as well as to that of Wendell Berry and Annie Dillard. In Terrarium, he infuses his ecological vision into a timely and beautifully wrought science fiction novel.

How the novel opens:

Phoenix thought of her as the barefooted walker. From the morning when she first loomed into view like an unpredicted planet, she set up fierce tides of desire in him.

On that morning the pressure inside Oregon City and inside his head seemed no greater than usual, no more conducive to visions. A blue wig dangled stylishly about his ears, facepaint disguised his features, and a portfolio of satellite film beneath one arm identified him as a man bound for the office. chemmies regulated every bodily process that needed regulating. All his life was in order. But when Phoenix emerged from his apartment, ticking off the day's plans in his mind (work, then breeze-tripping for lunch, electro-ball in the afternoon, and eros parlors in the evening), suddenly there she was, a barefooted woman pacing in the wrong direction on the pedbelt. Slap of naked flesh on the conveyor. By matching her stride to the speed of the belt she managed to stay at the same point in the corridor, just opposite his doorway. Bustling along, yet never stirring from her chosen spot, she reminded Phoenix of the conjoined whirl and stillness of a gyroscope.

Surely a madwoman. Escaped from the health patrollers. Phoenix backed rump against his apartment door just as it clicked shut. Embarrassed, he glanced down, but not before catching a glimpse of red hair escaping from the woman's hood, her cheeks showing feverishly through a skimpy glaze of cosmetics, her green gown actually darkened with perspiration below the arms and around the neck. The corridor trapped her scent, forced him to breathe it. Smell of hot animal. Her knees, thrusting against the gown at each step, nudged a raw spot in his brain. Just a beast, a throwback, he thought--and he felt aroused and ashamed.

By lowering his gaze, he hoped to give the woman a chance to recover her senses, to withdraw from his life. But down below were those naked feet, slapping the pedbelt, and they sent his gaze skidding back up along her flanks and spine to the hooded face. So he had the misfortune to be staring at her luminous green eyes when she turned on him and said, "It's called walking, you idiot."

"...his novel often reminded me of such classic dystopian works as Zamiatin's We and of Le Guin, with his parallel devotion to conservation and spiritual harmony (though Sanders's roots are Quaker instead of Taoist). Readers who enjoy exploring ideas in human settings will want to savor this book." --Len Hatfield, Fantasy Review

"How can we survive and progress without letting the same mistakes overtake us again and again? Rather than retreat, as some groups propose, this writer suggests we move forward in joyful communion with the universe of which we are a part. He does this with a simplicity and an elegance that lead to an understated, yet mind-blowing conclusion." --West Coast Review of Books

From the author's Afterword:

For all my worries, I wrote Terrarium with a sense of hope, and on rereading the book I find that hope renewed. The earth remains fertile and resilient. No matter how far we have retreated indoors, we are inseparably bound to the earth through our senses, through our flesh, through the yearnings and pleasures of sex, through the cycles of birth and death. Like Phoenix, any of us may wake up to discover where we truly dwell. Like Zuni and Teeg, we may labor for what we love, no matter how many voices tell us to give up. Like the colonists gathered on the Oregon shore, we may use the wealth of human knowledge to build communities that are materially simple and spiritually complex, respectful of our places and of the creatures who share them with us. We may seek holy ground together. Even in dark times, we may keep telling stories, witnessing to a wild beauty that we do not invent, a power we do not own. 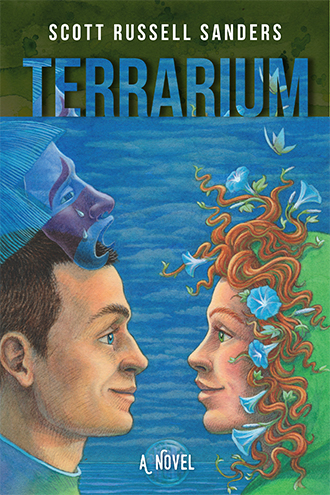 With round-the-clock drugs, games, and eros parlors to entertain them and virtual weather to sustain them, humans live inside a global   network of domed cities known collectively as the Enclosure. Having poisoned the biosphere, they were forced to close themselves off from the Earth.  The cities of the Enclosure, scattered around the globe on the land and sea, are connected by a web of travel tubes, so no one needs to risk exposure. Health Patrollers police the boundaries of the Enclosure to keep the mutants and pollution out.

Phoenix Marshall decodes satellite images for a living. He has spent all 30 years of his life in   Oregon City, afloat on the Pacific Ocean. He busies himself with work and various forms of recreation to keep boredom at bay. One morning he opens his door to find Teeg Passio. She is the same age as Phoenix, but radically different--she is enticingly and menacingly wild. She grew up on the outside. Her mother oversaw the recycling of the old cities, and her   father helped design the Enclosure. Teeg works for a maintenance crew, which allows her to travel outside the walls. When she introduces Phoenix to her crew, he is drawn into a high-tech conspiracy that may threaten everything he understands. Are humans really better off within the Enclosure? Is the Earth better off with humans in quarantine? Are Health Patrollers keeping humans safe or just imprisoning them?

Teeg seduces Phoenix out of his orderly life,   enlisting him in a secret, political, and sexual rebellion. Teeg and her co-conspirators, part mystics, part tech-wizards, dream of a life   embedded in nature. Then one day, during a closely monitored repair mission on the outside, a typhoon offers the rebels a chance to escape   the Enclosure and test their utopian dreams in the wilds.