Scott Russell Sanders was born in Memphis, Tennessee. His father came from a family of cotton farmers in Mississippi, his mother from an immigrant doctor’s family in Chicago. He spent his early childhood in Tennessee and his school years in Ohio. He earned his undergraduate degree from Brown University and his Ph.D. in English from the University of Cambridge. He spent his teaching career at Indiana University, where he was a Distinguished Professor of English.

Among his more than twenty books are novels, collections of stories, and works of personal nonfiction, including Staying Put, Writing from the Center, Hunting for Hope, and A Private History of Awe. In the past decade he has published A Conservationist Manifesto, his vision of a shift from a culture of consumption to a culture of caretaking; Earth Works, a selection of his best essays from the past thirty years; the novel Divine Animal; Dancing in Dreamtime, a collection of eco-science fiction stories; and Stone Country: Then & Now, a new and enlarged edition of his documentary narrative co-authored with photographer Jeffrey Wolin. His children's books include Aurora Means Dawn, Warm as Wool, Meeting Trees, and The Floating House.

Sanders has received the Lannan Literary Award, the Associated Writing Programs Award in Creative Nonfiction, the Great Lakes Book Award, the Kenyon Review Literary Award, the John Burroughs Essay Award, and the Indiana Humanities Award, among other honors, and he has received support for his writing from the Lilly Endowment, the Indiana Arts Commission, the National Endowment for the Arts, and the Guggenheim Foundation. The Society for the Study of Midwestern Literature named him the 2009 winner of the Mark Twain Award; in 2010 he was named the National Winner of the Glick Indiana Authors Award; in 2011 the Fellowship of Southern Writers presented him with the Cecil Woods, Jr. Award in Nonfiction; and in 2012 he was elected to the American Academy of Arts & Sciences.

He is currently at work on a collection of short stories, a book about the meaning of wealth, and a collection of essays about the role of imagination in an age of climate disruption. His writing examines the human place in nature, the pursuit of social justice, the relation between culture and geography, and the search for a spiritual path. He and his wife, Ruth, a biochemist, have reared two children in their hometown of Bloomington, in the hardwood hill country of Indiana’s White River Valley.

Additional material about SRS has been posted on Wikipedia here. (He has not contributed to or edited this entry.) 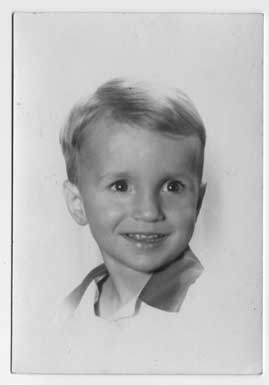 Scott age 2, showing that he once had hair.