from the opening pages...

Solid as rock, we say. Build your foundations upon stone, we say. But of course the rocks are not fixed. Waters carve them, winds abrade them, heat and cold fracture them, the twitches of the heaving earth buckle and warp them. The sands on our beaches started out as bits of mountain. The soil that feeds us is laced through and through with pulverized stone. Right this minute the oceans are manufacturing the stuff, and so are volcanoes. A cauldron of fresh brew is boiling beneath our feet. The very continents glide about like great rafts, floating on the planet’s molten mantle, one plate grinding against another, new rocks surging up from trenches in the seabed, old rocks slithering down. A time-lapse film of any landscape, with frames shot every thousand years or so, would reveal a flurry of changes. From one millennial blink to the next, God would see an altered world. The Psalmist knew what he was talking about when he said the hills skip like lambs. They do, only we’re too quick-eyed to notice.

Still, in our hasty sight the rocks seem fixed. By comparison with our brief lives and our fleeting works, they might as well be eternal. Their clocks are running, but only a millionth as fast as ours. There is nothing like geology to take the urgency out of the morning’s news. If we could watch events from the rocks’ point of view, all of human history, from the stalking of woolly mammoths to the launching of space shuttles, would appear like a blinding flash. Our longest running shows, such as Egypt or China, would be mere blips in the ears of stones. When we disappear, we probably will carry a good many other animals and plants down to extinction with us. But rocks won’t keep much record of our brief transit. Despite all our drilling and blasting, we have barely scratched this stony planet.

If you find comfort in that, if life in a throwaway economy makes you hunger for durable goods, if your blood pressure goes up and down with the stock market or political polls, if you fret about pulling off the monthly balancing act in your checkbook, if the daily rush makes you dizzy—you would do well to spend time in stony country. And you will find few places where the presence of stone is richer than it is in a narrow belt of hills and creek beds in southern Indiana.

...and the final paragraphs.

I am glad to live in this pocket of rumpled hills where the crust of earth shows through. When the ticking of my inner clock rattles my soul, and I feel the wind of mortality whistling through my ribs, I go out to climb a cliff or splash down a stony creek or dangle my legs over a quarry’s lip. Some future day, oceans will wash again over this place where I live, and once again myriads of beasties, many of them indistinguishable from the sea creatures of three hundred million years ago, will spawn and die in the shallows of Indiana.

Words have become so cheap, millions are flung at our ears and eyes every hour. The words I lay down this minute are no more than pinpricks on a screen, fragments of language settling like bits of shell in the waters of a tiny sea. Nearby on my desk is the slice of limestone that Jack Rogers gave me thirty years ago as I left his office at Woolery Mill. A rectangle the size of a paperback book, it is polished smooth on one side, and still rough on the other side from the curving grooves left by a sawblade. I keep it within reach as I write to remind me of those who dig and cut, those who carve and build. The gauzy, spiral shapes of fossils in the stone, like so many distant galaxies, speak to me of the force that curls through my fingers and drives the tides and sets the wondrous worlds to spinning. 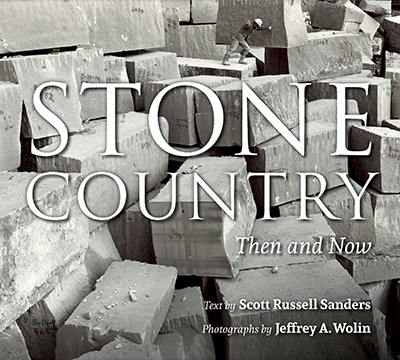 Quarrying, cutting, and carving limestone has provided work for thousands of people in Indiana for nearly two centuries. Along highways and backroads, the brawny machinery these workers use to finesse the stone, the humpbacked mills where they shape it, and the rails and roads where they ship it dot the landscape. In this new edition of Stone Country, Scott Russell Sanders and Jeffrey A. Wolin talk with the stone workers, explore the quarries and mills, and trample along creeks and railroad spurs uncovering the history of the industry and the people who built it. These new stories and photographs are a biography, not of a person—although it is filled with many portraits of individuals—but of a place. It is an up-close look at a singular point on the planet where the miracles of geology have yielded a special kind of stone, and where landscape, towns, and the people themselves bear its mark. 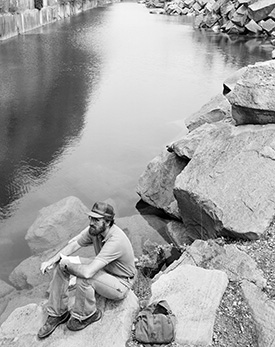