On coming to a new place, my father would take a pinch of dirt, sprinkle it in his palm, sniff it, stir it with a blunt finger, squeeze it, then rake it on his tongue, tasting. When I first saw him do this, I was puzzled. Why eat dirt? “Just trying to figure out where I am,” he explained.

This book is my own tasting of the dirt, my effort to find out where I am. It records my attempt to fashion a life that is firmly grounded--in household and community, in knowledge of place, in awareness of nature, and in contact with that source from which all things rise. I aspire to become an inhabitant, one who knows and honors the land. In these pages I follow various and sometimes crooked paths, yet I am always driven by a single desire, that of learning to be at home. The search is practical as well as spiritual. Only by understanding where I live can I learn how to live.

There’s no need to go looking for home, of course, unless you’re lost. I have been lost, in ways no map could remedy. I cannot return to my native ground and take up residence there. The farm in Tennessee where I spent my earliest years is buried under asphalt; the military reservation where I lived next is locked away behind fences and soldiers; and the farm in Ohio where I spent the rest of my childhood has been erased entirely, the house and barn bulldozed by the army, the woods and fields flooded by a boondoggle dam. If I am to have a home, it can only be a place I have come to as an adult, a place I have chosen.

What can be seen from my window, what can be reached on foot within a day’s walk of my house, may seem tame enough: no surf breaks on rocky shores, no mountains gleam with snow, no bears prowl. It is a settled region, marked everywhere by human presence. But for all our buildings and lights and roads, for all our signs and words, that human presence is only a thin film stretched over mystery. Let sunlight flame in a blade of grass, let night come on, let thunder roar and tornado whirl, let the earth quake, let muscles twitch, let mind curl about the least pebble or blossom or bird, and the true wildness of this place, of all places, reveals itself.

"Wayland," the final chapter in Staying Put, was selected for Best American Essays 1993

Sanders's essays have a way of getting into your head and accompanying you like familiar spirits.... Sanders has become a master." --John Schultz, Chicago Tribune"

Sanders is at heart a tough politician with a cause. Like Barry Lopez...Sanders finds in nature a radical rebuttal to Western culture.... He proposes a different kind of citizenship." --Alex Raksin, Los Angeles Times"

"For nearly two deades now, Sanders and his family have occupied the same two-story house on the same tree-lined street. While all of this 'sameness' might prove suffocation to a writer of lesser talent and imagination, Sanders has charged it with meaning and power." --Susan Hanson, San Marcos Daily Record 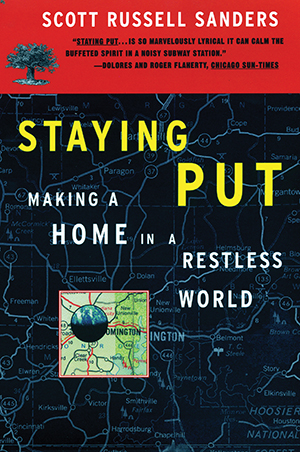 The place Scott Sanders has chosen as home is a small city in the hills of southern Indiana. In Staying Put, he tells us how a house, lived in and worked on over the years, can become animate with a family's life. He sets the task of understanding a place like Bloomington, Indiana, in the larger context of living responsibly and well on the planet. He reminds us that wildness and at least "seven of the great mysteries" ("death, life, beasts, food, mind, sex, and God") can be found anywhere, if we look deeply enough.

There are many voices in modern American culture telling us to keep moving, to change houses or partners or jobs, trying to make rootlessness a virtue. Here, grounded in personal narrative, is a different argument. Scott Sanders offers a steady, eloquent voice urging us to stand our ground and commit ourselves to one place--be it a home, marriage, neighborhood, or landscape.

Staying Put invites us to undertake our own search for home, a search both practical and spiritual.