Often I wake in the night, feeling panicky, not knowing where I am. I reach out to stroke my wife's shoulder. I peer into the dark, searching for the moonlit rectangle of a window, the lacy outline of a fern on the sill. I listen for the creak of old timbers in the house, the sound of my children's breathing, the drowsy chatter of birds. In the night, as in the day, I locate myself through what I love.

What I love binds me in cords that stretch to infinity. In these essays I begin with the fierce, tangled relations between parent and child, between man and woman. From the family I move to the larger loyalties of neighborhood, community, and region.  Then I speak of belonging to nature, this order that sustains us, and of inhabiting the earth. Finally, warily, I reflect on that encompassing mystery we call the universe. The movement outward to greater and greater circles is also a movement inward, ever closer to the center from which creation springs.

I do not expect to arrive at the absolute center or circumference of things, at least not along a path of words. I will follow that path as far as it leads, then go on ahead in silence. The journey home is my effort to come fully awake, to understand where I actually live. If, on the way, I have discovered any secrets worth telling, they must be ones known to all of us in our clear moments. I seek a truth as common as dirt or laughter, and as rare.

Secrets includes the award-winning essay, "Under the Influence"

Praise for Secrets of the Universe:

"Scott Sanders makes use of a Hoosier plain-spokenness and Midwestern common sense to home in on serious matters with intelligence." --Edward Hoagland, author of Heart's Desire: The Best of Edward Hoagland

“Sanders looks for and often finds universal truths in the particulars of everyday life. . . . A marvelous celebration of the small and large mysteries of life.” —Kirkus Reviews

"Three cheers for Scott Russell Sanders, whose splendid Secrets of the Universe should draw more deserved attention to one of the best writers of nonfiction going." --Columbus Dispatch

"Secrets of the Universe. . . illuminates the mysterious places in which we dwell--our minds and bodies, our neighborhoods and cities, the wilderness and the world--all parts of us that make us whole." --Richard Holmes, The Bloomsbury Review

"Scott Sanders knows in his bones what it means to write the personal essay: it means to take risks. These are personal essays in the best sense of personal--candid, intimate, thoughtful, individual." --Robert Atwan, editor, Best American Essays

"A volume of essays likely to delight those who receive it. . . . It's the kind of book you want to share." --Charlotte Bruce Harvey, Boston Phoenix 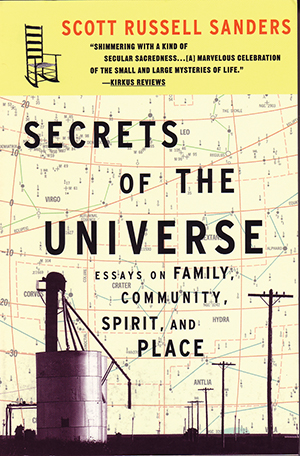 The essays in Secrets of the Universe move outward--from family to community to the larger natural world--as the author records a personal and multifaceted "effort to come fully awake, to understand where I actually live."

"Reasons of the Body" examines the delicious games and grueling contests played by fathers and sons through sports, while "Looking at Women" records the confusion that many men now feel as they move toward a new relationship with women. In "Living Souls," Sanders visits a Soviet Union in upheaval and learns something of what it means to dwell in history. Writing on landscape, from the farms of the Midwest to the sands of Cape Cod, the author ponders what it means, in our nomadic age, to belong to a particular place, to be rooted in the land. Reflecting on yard ornaments, road signs, the graffiti painted in alleys, the food served in cafes, Sanders probes the culture we share as Americans. "Speaking a Word for Nature" offers a manifesto for a new literature inspired by ecological wisdom.

Beneath the surface variety of these essays is the author's unmistakable and keenly entertaining voice and the drama of a life spent trying to inhabit the earth responsibly, alertly, wisely.