Where the search begins...

Suppose your daughter is engaged to be married, and she asks whether you think she ought to have children, given the sorry state of the world.  Suppose your son is starting college, and he asks what you think he should study, or why he should study at all, when the future looks so bleak.  Or suppose you are a teacher, and one student after another comes to ask you how to deal with despair.  What would you tell them?

My children and my students have put those questions to me--haltingly, earnestly--and I feel that I owe them an answer.  They are not asking for assurances of pie-in-the sky, for magic pills or guardian angels, for stories ending happily-ever-after, but for real and present reasons to face the future with confidence.

Let me make clear that these young people are not depressed, although each of them could name friends who are, for an epidemic of depression is sweeping through their generation.  I have met that illness and many who suffer from it; I know its contours and dark recesses.  I am speaking here of something else. My son and daughter and, so far as I can tell, the students who pose these questions are bright, healthy, stable, and competent. They have every reason for confidence in themselves; it is the earth they brood about, the outlook for life. They know we are in trouble.  Everywhere they look they see ruined landscapes and ravaged communities and broken people.  So they are asking me if I believe we have the resources for healing the wounds, for mending the breaks.  They are asking me if I live in hope.

Praise for Hunting for Hope:

"This book is an act of amazing generosity--five decades of seeing and living distilled into deep draughts of hope. It could help the planet; it will definitely help you in your relationships with spouse, children, community, and earth." --Bill McKibben, author of The End of Nature

"Scott Sanders is among America's finest living essayists, but he is also something else: a mortal who has felt loss in his family and in the land. And here we have a chance to hear how this caring heart and mind have found hope, and sustained it, in wondrous ways." --Gary Paul Nabhan, author of Cultures of Habitat

"This is one of the rare books in which hope seems reasonable, and the grace and economy of the prose nourishes the parched spirit." --Robert Taylor, The Boston Globe

"An extraordinary book by one of America's most elegant writers. It is a veritable treasure trove of wisdom served up with love, imaginative verve, and spiritual sensitivity." --Values and Visions Reviews Service

"Sanders has blended the essences of philosophers, teachers, poets and authors, all filtered through his own unique Midwestern heart and mind, into passionate, crystal-clear, prize-winning essays." --James Alexander Thom, Indianapolis Star

"A small, bright arrowhead of a book: carefully hewn, piercing, balanced; betraying in its form its very substance. . . . [Sanders's] particular, urgent voice wields that arrowhead of hope into the hearts of his children, his students, and his readers." --GraceAnne A. DeCandido, Booklist

"Throughout the meditations in Hunting for Hope: A Father's Journeys, Scott Russell Sanders "cannot turn off" his "fathering mind." In the essay "Mountain Music I," Sanders proposes a hiking trip with his teenage son to find the source of their constant quarrels. In anticipation of the trip Sanders is "primed for splendor," but soon into their hiking, the son stalks away. The active "fathering mind" can find itself consumed with his children's well-being. "One of the joys of reading a good essay is watching someone think on the page," says Jerald Walker, author of Street Shadows: A Memoir of Race, Rebellion and Redemption. In The Los Angeles Review of Books, Ned Stuckey-French recently talked about the "shared intimacy" between the essayist and reader being like "a fireside chat between two close friends."

"Watching Sanders traverse the trails of tension with his son makes me feel much more human after trying to propel my own son to do pretty much anything he doesn't want to, even though he is much younger than the teenage character. The candor and clarity of Sanders's pursuits in the fresh language of his rhythmic prose, make me want to buy Hunting for Hope for all my friends who are dads." --Huffington Post 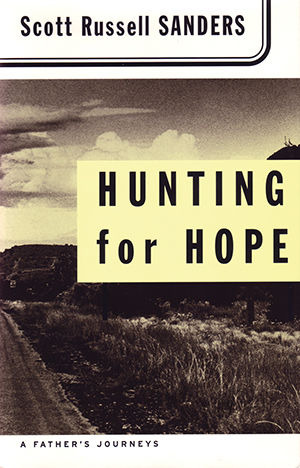 Hunting for Hope begins with a hiking trip in the Rockies meant to get at the root of the strife between the author and his teenage son.  On their first day in the mountains, the son lashes out: “Your view of things is totally dark.  You make me feel the planet’s dying and people are to blame and nothing can be done about it.  There’s no room for hope.  Maybe you can get by without hope, but I can’t.”

The quarrel convinces Sanders that his anguish over the fate of the earth has cast a shadow over the world for his son, and it sets him hunting for sources of healing and renewal. For Sanders, “one of the best writers of non-fiction going” (Columbus Dispatch), his son’s outburst isn’t the first time he’s been challenged on the subject of hope:  “Suppose your daughter is engaged to be married, and she asks whether she ought to have children, given the sorry state of the world,” he writes. “Or suppose you are a teacher, and one student after another comes to ask you how to deal with despair.  What would you tell them?” Hunting for Hope is the answer he offers to his children, his students, to all who wonder how we might face the future with confidence.

In a narrative threaded through with accounts of hiking in the mountains with his son and of walking down the aisle with his daughter at her wedding, Sanders gathers in this deeply felt book his own reasons for hope. In “Wildness” he traces the shaping power of nature, and in “Body Bright” he celebrates our ability to participate in the energies of Creation; in “Skill” he remembers the human capacity to make and to mend; and in “Fidelity” he considers the value of commitment to people, places, and work we love.

In prose “shimmering with a kind of secular sacredness” (Kirkus), Sanders meditates on the restorative virtues of family, simplicity, and beauty, and on the ultimate ground from which all things rise. Hunting for Hope is a reminder of the healing powers in nature, in culture, in community, and within each of us—a spiritual handbook on the practice of hope.